The next iteration of Oculus’ VR headset has been introduced by Facebook’s CEO, Mark Zuckerberg.

The new model will combine the benefits of existing VR headsets and minimize the negative aspects that are common complaints. Oculus Quest will be wireless and will not require a powerful PC to operate, but it will still hold the same gaming functions that VR users enjoy by using the Oculus Rift.

Exciting new developments in VR technology will continue over the coming years, propelling the industry further and further into mainstream success. The Oculus Quest is expected to be released in spring of 2019. 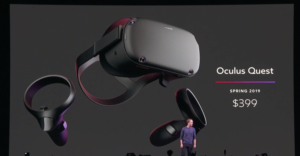